Siena, information and advice on one of Tuscany's most beautiful hill towns 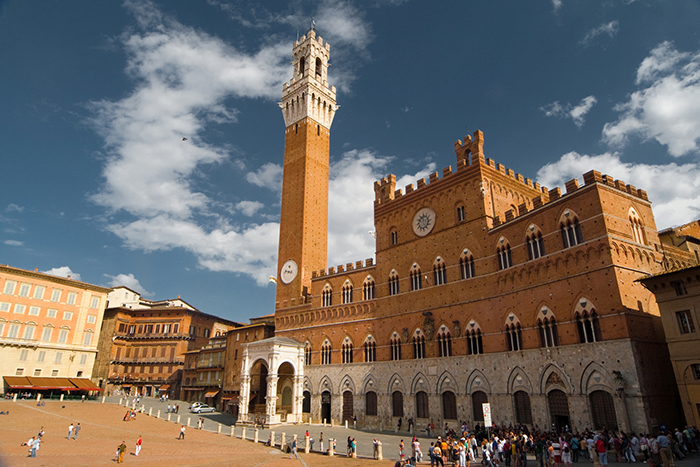 Siena is a small, friendly city, easily walkable. It makes a great base for exploring this part of Central Tuscany.

We have a wide range of fantastic Siena villas,in or very close to the city to suit all tastes and budgets. Click on the image or villa name for more information. If you don't see a villa that suits, please get in touch, we have lots more.

- Relax in the peace and quiet of the Tuscan countryside, enjoying the breathtaking views from your pool, maybe even sipping on a glass of local wine. Then, when you have the urge to explore, hop in the car or train and you can be in Siena in a matter of minutes. We have a wide range of villas near Siena. If you don't see what you want, get in touch, we have lots more.

Here is a map of Siena and its surroundings.

Siena is set in some of the most breathtaking scenery in the world, approx. 70 kms from Florence. Although today, tourism is the main activity, in centuries past, during the middle ages, it was a proud, wealthy, and warlike independent city-state. Today visitors from all over the world can peacefully stroll through its narrow streets, exploring each of the "Contradas" or local neighborhoods. The "contradas" really come to life during the “palio”, which is a horse race, which takes place twice a year (2 July and 16 Aug) in the main "Piazza del Campo". But be warned! This is no tourist pageant. There is serious rivalry between the 17 competing Contradas. It is a not to be missed spectacle. This video really shows the raw emotion involved.

Siena is probably the only city in Mediterranean Europe where parking is not a massive headache (there is ample parking all round the city walls), The centre of Siena is accessible only on foot and except for police cars, ambulances and a few small buses, which cover some streets the city has a quiet atmosphere of times gone by.

Siena is a beautifully preserved medieval city, even walking the streets is a treat. Its main attractions are -


- The Piazza del Campo, the unique shell shaped piazza at the centre of the city, and twice a year the racetrack for the Palio. Is a great place for people watching, whilst enjoying an ice cream or glass of wine.

- The Palazzo Pubblico, Siena's City Hall for almost 800 years, contains (amongst many other things) the famous frescos on good and bad government by Ambrogio Lorenzetti, frescoes by Simone Martini and Duccio, and access to the Torre di Mangia, from whose top you can view a beautiful panorama of the Sienese countryside.

- The Duomo, Siena's magnificent black and white Italian Romanesque cathedral including the Libreria Piccolomini, Baptistery (separate entrance and charge), and an attached Museo dell'Opera del Duomo (separate entrance and charge), which includes the famous Maestà by Duccio. After you've seen all the art, you can also treat yourself to a beautiful panorama from Il Facciatone in the museum.

- The Pinacoteca, full of Sienese painting from the city's Medieval heyday.

- Palio Horse Race - a horse race like nowhere else, between the 17 contrade of Siena, is run in The Campo of Siena on July 2 and August 16. All Sienese are affiliated with one of the contrade, to which a typical Sienese feels loyal with a strength perhaps surpassed only by their loyalty to their family. Since the 11th century, the Sienese have conducted festivals every year where the contrade compete for renown (and in times gone by, actual political power) through contests such as flag throwing, horse racing and even fist fights. The fist fights no longer happen but the spirit of competition between contrade is still fierce.

- Classical concerts during the summer at the Accademia Musicale Chigiana, and at various locations in the city during the Settimana Musicale Senese.

- Excellent “Gelato” can be found just off the Campo at two great ice cream shops called "Il Gelato" and "Brivido".

- For something more substantial, "La Chiacchiera" next to the House of St Catherine is an excellent source of typical Tuscan cuisine; the pici (thick, homemade noodles) are superb.

- Osteria Sotto le Fonti, Via Esterna Fontebranda, 114, 0577-226446, Restaurant off the beaten path, with owners who serve you personally; the waitress speaks fluently English and knows how to recommend you wine, as she is also a wine tour guide. Is a pleasant walk downhill shortly outside the gates of the city, allowing you to look up at the top of the Duomo.


Our whole group had a memorable week so thank you for EVERYTHING you did to make it special, and thank you for sending us so much additional info that was very helpful. I am very sad to be back in the States but grateful for the experience. I will definitely recommend  your company to everyone I can, and thanks again!
Stephanie, New York